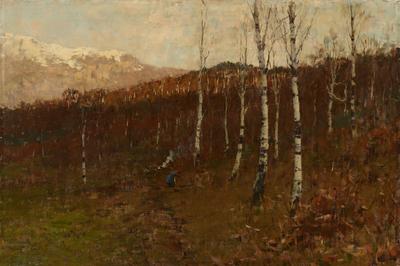 Through three thematic sections (landscape, childhood, womanhood), the exhibition effects a comparison  between the works of Giovanni Segantini – made famous by the popularising and intense effects of photomechanical reproductions – and the works of the Trentino artists who were his contemporaries, such as Andrea Malfatti, Eugenio Prati and Bartolomeo Bezzi.
Landscape, children and the female figure are the themes that gained most attention in the artistic production of the late nineteenth century, to the point of becoming true genres in their own right.
The old division of painting by genres dominated the art system throughout the nineteenth century, from the classrooms of the academies to the exhibition halls.
The same holds true of Segantini’s painting: his youthful work concentrated mainly on still-lifes, which were much in demand from bourgeois patrons, and he then moved on to portraiture and from here to the setting of figures in nature, rendered in masterly details of landscape, in which the naturalism of the forms blends with the symbolism of the impulses and ferments typifying the forces of nature.
It is in Segantini’s depiction of the female figure, however, both in the form of a Christian Goddess or as Angel of Life, or, indeed, as a nude immersed in nature as in the case of Vanity, that we best see the transition to a new idealist conception of art, which would shape Italian art in the early twentieth century.