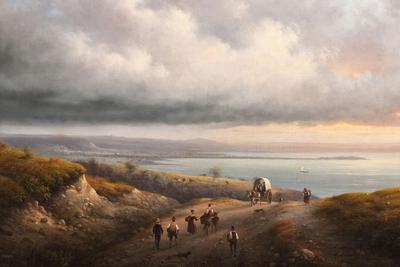 Assorti nel paesaggio. Vedute a confronto in Pinacoteca  (Absorbed in the Landscape. A Comparison of Views in the Art Gallery) takes part of its title from a 2015 exhibition in Museo Alto Garda dedicated to a selection of Garda landscapes by some Nordic painters from the 19th to the 20th century. For this specific project planned for 2016, Absorbed in the Landscape is more than just the title of an exhibition or section: it has become the name of a score that pervades all areas of the MAG art gallery, as a theme that unfolds along the halls of the entire first floor of the museum.
The subtitle, A comparison of Views, offers a key to understand the exhibition, which is not intended to be the only one in the gallery, but to suggest a possibility of proceeding through the spaces, encountering views, of course, but also visions and interpretations of the landscape through the centuries and the languages of painting, cartography, engraving, drawing, and historical and contemporary photography.

This arrangement of the MAG gallery, which displays historical works from the museum's collections together with newly acquired paintings and original incursions by genres also belonging to its patrimony, is aimed at presenting a succession of encounters and comparisons in aesthetic, emotional and evocative terms.

The large picture La partenza del Generale Vendôme nel 1703 (The Departure of General Vendôme in 1703) (Anonymous, 18th century) greets visitors at the start of the tour, supported by the equally impressive Map of South Tyrol from the late 18th century and the Atlas Tyrolensis by Peter Anich and Blasius Hueber, both of which are accompanied by a selection of prints and photographs from the late 19th century (such as those by G.B. Unterveger, Augusto Baroni and Alois Beer) which are based on an iconography of landscape painting.
Proceeding by ‘encounters’, the exhibition tour passes by views of the lake and of the towns overlooking it, depicted in paintings by Italian and Nordic artists who immortalised these places in the period of transition between the last two centuries, including Giuseppe Canella, Luigi Bonazza, Carl Heinzmann and Heinrich Adam. These works are arranged in dialogue with the earliest photographs of the landscape and with views by contemporary photographers, such as Gabriele Basilico, Luca Campigotto, Vincenzo Castella, John Davies, Mimmo Jodice, Martin Parr, Bernard Plossu, Toni Thorimbert and Massimo Vitali, who worked in the Garda area in more recent decades to provide a personal interpretation of it for the museum project Sguardi Gardesani.
The exhibition is completed by the visions of the contemporary artists Tullio Pericoli and Mario Raciti, who have painted precious images of the Garda landscape for MAG in recent years, based on their own personal observation of the area.

The historic core of the art gallery remains in place, with sixteenth-century works by the mysterious monogrammist FV and by the sculptor Maffeo Olivieri, up to the Baroque era, when Riva del Garda witnessed the presence of one of the greatest exponents of seventeenth-century Italian painting, Pietro Ricchi of Lucca. Works are also exhibited by the most important artist of Trentino Neoclassicism, Giuseppe Craffonara, and the literary salon of Andrea Maffei is represented, with nineteenth-century masterpieces by Francesco Hayez and Vincenzo Vela.