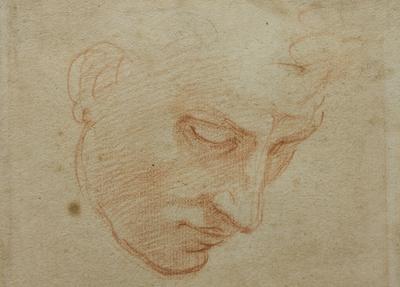 With its selected anthology of drawings from Casa Buonarroti, this exhibition overviews Michelangelo’s creative process when the master, in two stages between 1508 and 1512, was engaged in a titanic enterprise: the decoration of the ceiling of the Sistine Chapel, which was followed in 1536 by The Last Judgment on the Chapel’s altar wall.

As the reconstruction provided by a nineteenth-century etching by Tognetti shows, the Chapel’s vault was once decorated with a blue sky dotted with stars. Michelangelo made numerous drawings, which were then converted into the cartoons for transfer onto the wall before the frescos were painted. For the artist, working with his head tilted backwards on scaffolding built against the vault was such a torture as to be cited in a sonnet by him, accompanied by an ironic sketch, belonging to a codex from Archivio Buonarroti, on display here.

The sheets range from studies of individual limbs to isolated figures of Ignudi bearing festoons and figures in the most varied positions, with such masterpieces as the studies, in two sheets, for the vault’s Expulsion from Earthly Paradise or the overall drawing of The Last Judgment. As soon as it was unveiled, the Sistine Ceiling enjoyed enormous popularity, and during the nineteenth century some even commissioned curious objects reproducing it, like the small table from that time.

The second part of the exhibition includes the preparatory drawings for The Last Judgment, from the overall study to those for individual figures, accompanied at the close by antique copies of the figures of the Damned, bearing witness to how the great fresco had become a textbook for generations of artists.
To facilitate the knowledge of the monumental fresco and of its complex drawings of Ignudi, cycles of engravings were made from them, like the one, in ten tables, by the Mantuan Giorgio Ghisi, on display in the exhibition and datable to the late 1540s.
Bearing witness to how the Sistine Chapel appeared in 1766 is an etching by Francesco Barbazza based on a drawing by Francesco Panini, son of the renowned Roman landscape painter Gian Paolo, from Calcografia Camerale romana.