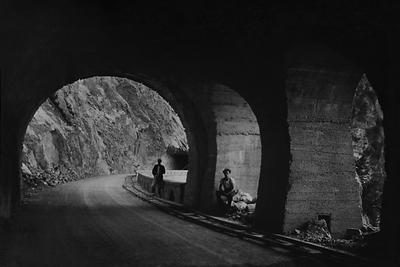 With the exhibition dedicated to the Gardesana Occidentale road (which runs along the western shore of Lake Garda), curated by the Araba Fenice association in Arco as part of a historical and photographic research started in 2018 and supported by the Fondazione Cassa di Risparmio di Trento e Rovereto, the MAG continues its mission of being a museum of the territory able to offer support to local institutions and fuel research into issues concerning the identity and transformation of the Garda landscape.

The exhibition sets out to document the history of the construction of the SS 45 bis, known to all as the Gardesana Occidentale, comparing it with its current status. The evolution of the architectural structures of the tunnels and of the road itself is also documented, in order to offer a trace and memory of the great value and collective experience this historic route represents. The SS 45 bis is a major trunk road used also by heavy vehicles, but in the past used to see articulated lorries with up to 22 tyres. In the near future, this very road will also become a cycle path, one that is already becoming famous all over the world; it is just one of the Italian government’s five strategic projects in the area of cycle routes.
The 154 kilometres of the Gardesana Occidentale runs alongside the most significant events of the twentieth century: the outbreak of the First World War which revealed the need for the construction of this route, the twenty years of fascism that saw itself as a promoter of design and construction, the use of its tunnels during the Second War as a place in which to relocate factories. And on to the economic boom that saw articulated lorries with up to 22 wheels run on this asphalt, and finally to today’s tourism that includes the discovery of Lake Garda using bicycles.
A photographic report put together over the last year by the association Il Fotogramma of Nago-Torbole, another major cultural player in the area, examines the historical images of the 70 tunnels dotting the road. These images come from the photographic archive of the MAG, of the Il Fondazione Il Vittoriale degli Italiani and from private collections.
Period images, contemporary photographs, videos, documentary materials and other traces provide the materials and languages on which the narrative of this exhibition is based,  reconstructing the history of the Gardesana from its founding to the present day.
The exhibition also displays reproductions of the projects and maps of the road, on loan from the Fondazione Il Vittoriale degli Italiani, and some historical films from the Istituto Luce.
Finally, a section is dedicated to the memories and photographs of the truck drivers who travelled the Gardesana in the past.