Home
Home / Exhibitions / Archivio / Segantini. The Memory of Images
IT   EN   DE
Segantini. The Memory of Images
MAG Arco, Galleria Civica G. Segantini
Curated by Alessandra Tiddia - In collaboration with MART, the Modern and Contemporary Art Museum of Trento and Rovereto
What is it that decides the fortunes of an artist? Of course, his talent, and the quality of his works are decisive factors, but just as important is the spread of the awareness of his work.
+2 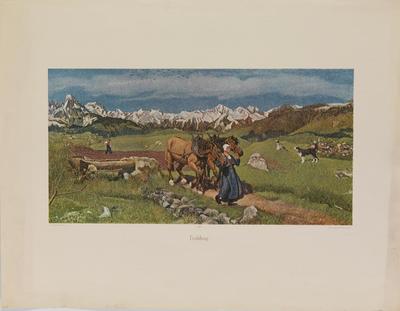 It was to this end, for example, that around the turn of the 20th century the great international art shows were first held. The Secessions started out above all as organisations capable of providing exhibition spaces for those younger artistic forces, snubbed by the official Salons.

Art publications represent another decisive tool, from exhibition catalogues to monographs. The main European publishing houses in the 1900s began to publish monographs no longer only of the old masters, but also featuring the works of contemporary artists. The monograph marked the establishment, at times even the consecration of an artist, through the value of the critical text, but above all through the quality of the images published.

Technological progress favoured the spread of the reproduction of masterpieces, due to the continuous innovation in photography as well as in the methods of print and mechanical reproduction, which with the passing of time went by the names of photo-etching, photogravure, collotype, heliotype, zincography, etc., but more than anything else, allowed for the transition from the photo to its printed reproduction, initially in black & white and later also in colour.

This was a revolutionary step in terms of the perception of the work, ushering in and then broadening the market of facsimiles, forerunners of the modern-day posters, or in the digital era, of images downloadable from the Internet.

The exhibition thus features a series of photographic images and photo-mechanical reproductions of the works of Giovanni Segantini, housed in the collections of the Mart and the Archive of Vittore Grubicy and Benvenuto Benvenuti, also to be found at the Mart, alongside the unique postcards produced using etching techniques by his sons, Gottardo and Mario Segantini, who held onto the reproduction rights of their father’s work for many years. The reproductions of his work were destined not only to art catalogues, but also the sale of single images, or the creation of luxury albums.

Starting out from the critical acclaim of an artist and the means of reproduction of his work, the exhibition intends to pose a number of reflections not only on the theme of the valorisation of artists or the reproducibility of artworks, while also shedding light on some of the most contemporary issues, bound up in the concepts of public dominion, free-access works and open source, which today in the era of Wikipedia – a treasure trove of information, texts and images, offering free contents as well as free access – constitute key elements of the public domain ever more.

The exhibition initiative also sets out to adopt an active role in the promotion and valorisation of the works of Segantini, drawing comparisons between the works and their reproductions, not only through the display of the artefacts, but also by proposing an ‘active’ intervention on Wikipedia with the updating of texts relative to some of the keywords of the exhibition, and the uploading of some of the photographic reproductions on show in the exhibition, thus facilitating comparisons, research and future studies.