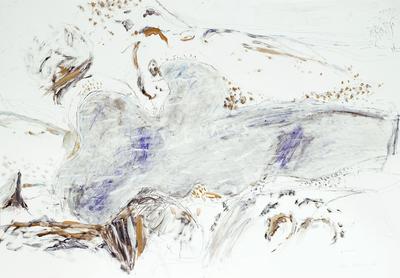 After a number of explorations of the Upper Garda territory carried out in November 2014, Mario Raciti started work on a series of paper-based works that offer various imaginary paths around the places that he was most enchanted by, both in terms of natural habitat and in that vaguer, more fleeting sense that implies the possibility of going beyond the visible, towards the unstable zones of a suspended, estranging and wandering vision.

The title chosen by the artist for this exhibition (Natura Oltre) hints at the overlapping of imagination that the landscape morphologies arouse, maintaining that character of presence-absence of the image that constitutes the constant feature of his research, the process of invention and the revelation of the invisible. This cycle of works is even more meaningful insofar as – in the research context that Raciti has been developing over recent decades around the forms of the unknown – it offers a welcome digression, a tale of multiple sightings that opens and closes entirely independently, with regard to the naturalistic point of reference. Through some 60 sheets of various sizes (pencil and ink drawings, tempera and mixed media), the exhibition brings together sets of images relative to places, natural shapes, panoramas which from minimal details open up towards the breath of elsewhere, with spatial intuitions that state the surpassing of all known forms.

The towering Rocca of Arco, the craggy rocks of the Ponale, the tunnels along the western shores of Garda, the waterfall of Varone, the transformations of Mount Brione, the symbolic rediscovery of the cemeteries, the panorama of the banks of the lake, the peaks of the mountains seen from afar, pathways and tracks through the vegetation, the outline of the olive groves and the spatial rhythm of the cypresses. These are the recurrent places that attracted the artist on his journey through the evocative atmospheres of the lakeside nature, figurative intuitions that express the astonishment and charm of the landscape, but also that subtle sense of bewilderment that Raciti looks upon as a key value in his approach to creating signs and colours. They are a sequence of poetical visions that draw on the innermost energies of the subconscious, the restless impulses of the imagination, the graphic-chromatic adventures that serve as a valuable lesson in looking, privileging the flow of imagination between meditation and inner transfiguration.

On this occasion, a catalogue of the works on show will be published, with an introductory  essay by the curator Claudio Cerritelli, professor of Contemporary Art History at the Brera Academy of Fine Arts.


Mario Raciti was born in Milan in 1934. After abandoning the legal profession, in the 1950s he decided to concentrate on his work as a painter. Since then, works of his have adorned the walls of collections and institutions for more than half a century, showing the continuity of an obsession, typical of an artist of any era, which led him, through the interplay of fantasies and momentary inspiration, to make his way through a world forever open to elsewhere, to the ‘beyond’.

“When in 1952 I enrolled in the law faculty instead of choosing fine arts at Brera, despite longing at all costs ‘to be a painter’, I was already starting to follow that ‘transgressive’ line that was to accompany me throughout my professional life, as a real painter. A bit of an anarchist, a misfit compared to the canons of the day (I used the brushstroke ‘à plat’ in the days of analytical painting!), I didn’t follow the dance of the day like others did; I didn’t sense art as a form (despite what many people said, I wasn’t like, Novelli or Twombly just because of the use of the white sheet and the pencil); I drew close to the poverty of drafting (in the ‘70s) more out of spiritual rarefaction than out of executive pragmatism (“yours is too poetic to belong to the new painting movement,” Fagone told me).
I was following other dreams; it was a journey leading towards a non-place, in a visionary atmosphere of tension and dissipation. I always thought about my painting, moving and changing in the deep psyche of the traveller, like a formative novel, à la Henry of Ofterdingen of which Klaus Wolbert cited the ‘light-blue flower’ for my work, which is a romantic symbol.
And so while for some I am “borderline”, and for others, like Barilli (writing in l’Unità), I am still an informal, “like a Japanese kamikaze still fighting on an island without knowing that the war is over,” (how long has passed since the old informal, almost as much as has passed since “making paintings”): I only know that, mindful of art of all eras, amidst the debris of today I invent “a final painting”, and it is down to my relentless, nagging dream if it is Kandinskily necessary for me to adopt a form which is nothing but that, and cannot be pigeonholed in the terms of current classifications.
And in this sense I feel ‘modern’ (and not ‘modernist’) because I dramatically experience the impossibility of painting to be there as a presence (“Were he not an artist,” to cite Gualdoni, “Mario Raciti would seek out a happy form of painting…”), but as a visionary trace, like a veiled elsewhere, waiting for a truer tomorrow, which today is painfully impossible.
I fiori del profondo is the latest evolution of my painting. After the fantastical figurative works of the ‘60s, the Presenze assenze of the ‘70s, the Mitologie of the ‘80s, the ‘90s saw the advent of the Misteri, which in the 2000s evolved into the Whys (the dramatic questions posed by Christ on the cross). Then, re-experiencing the myth of Proserpina, who, while a prisoner in Hades, yearns to communicate on Earth with her mother, Demeter, goddess of the harvests, allowing flowers to come to life in spring, opening up the drama to hope. That hope today concealed by the lack of real contacts, hope for a new way of life. Lately, I have been working on Una o due figure, with the flowers having become darts and the description of unreachable embraces.”