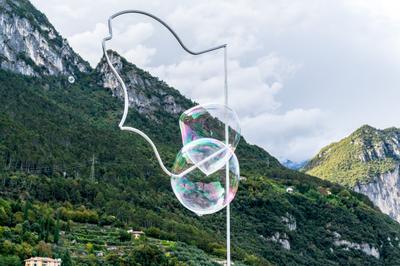 Der Blitz 2016 presents Arcipelago.
The project dedicated to contemporary culture in Alto Garda has opted to try its hand in the spaces of the MAG, without being confined to a specific area but seeking to catch the visitor’s eye in unexpected places and moments.
Arcipelago presents the work of six artists who were asked to conceive projects that could give new meaning to some of the spaces in the museum. The keep, the courtyard gallery, the entrance, the windows and the bookshop are among the spaces that house works by David Aaron Angeli, Mario Airò, Joys, Alessandro Moroni, Anna Scalfi Eghenter and Federico Tosi.
Arcipelago follows the example of previous years by distributing art interventions around the spaces of the MAG, with a preference for an experiential approach. The instigation of the experience was guided by a desire to suggest semantic shifts, through the introduction of unusual narratives in the spaces of the museum. Symbols, spaces and paths retain their basic identity, which is even emphasised, but at the same time assume an unfamiliar guise that brings them into a reality closer to that of our own time. Just as if an action movie director were to take control of the Rocca of Riva del Garda, some of the museum’s functions and spaces are highlighted by their incongruity. The symbolic stability dictated by cultures and histories, such as that of the flag, loses its defined coordinates and, without a total change of face, becomes embodied in the diachrony desired by the curators and artists.
Finally, Arcipelago will feature a contribution to the catalogue by Mali Weil with Instabile Universo, an exploration of the narratives that underlie the creation of an exhibition.