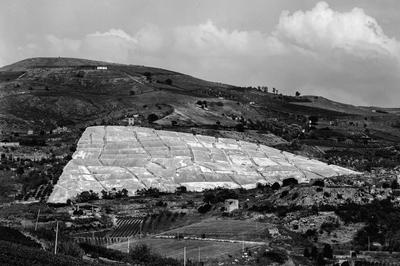 At MAG in Riva del Garda, a reinterpretation of the artist’s career starting from the largest Land Art work in the world

Commissioned to effect an intervention for the reconstruction of the village destroyed by earthquake in the Valle del Belice, Sicily, in 1968, Alberto Burri decided to work with the rubble of Gibellina, creating the largest Land Art work in the world. He covered the ruins of the village with a white shroud, a huge concrete cast that incorporates the remains and covers them, in part reflecting the layout of the old Gibellina.

The wound of beauty. Alberto Burri and the Grande Cretto di Gibellina exhibition is a travelling project curated by Massimo Recalcati with the scientific coordination of Alessandro Sarteanesi, produced and realised by Magonza editore.

After being hosted in the rooms of the Carlo Bilotti Museum - Aranciera di Villa Borghese in Rome, it comes to the MAG in Riva del Garda, in collaboration with the Mart Museo di arte moderna e contemporanea di Trento e Rovereto, from 22 June to 3 November 2019.
Starting from the great work of the Grande Cretto di Gibellina, the exhibition explores the artist's career with a selection of exemplary works, read in relation to the poetics of the wound, a theme that in the interpretation of Massimo Recalcati runs through his entire oeuvre, cutting into matter, drawing tears, lacerations, cracks, burns, before arriving at the unpublished forms that look forward to a genesis and a spiritual process.

The black and white photographs by Aurelio Amendola of the Grande Cretto are the culmination of the interpretative journey. A photographer who has specialised in taking images of Burri, of his work and creative processes, Amendola took the shots in two stages, in 2011 and 2018, after completion of the work (2015).
In addition, the video The Grande Cretto di Gibellina by Petra Noordkamp – produced and presented in 2015 by the Guggenheim Museum in New York on the occasion of the major retrospective The Trauma of Painting – films Burri’s work and the surrounding landscape poetically and with great technical skill.
Furthermore, some of the artist's unique works, true masterpieces, are included in the reading proposed by the famous psychoanalyst, extending not only to the Cretti but also to the Sacchi, the Catrami, Plastiche and a selection of graphic works.
“It is a wound that is everywhere, that trembles everywhere. A shock, a torment, a fall of infinite and ungovernable fissures”. As Recalcati writes in Alberto Burri e il Grande Cretto di Gibellina, “in the Legni the wound is generated by fire and the carbonisation of the material but, above all, by what survives the burning. In the Combustioni, the crumbling of the material, the manifestation of its very human friability, of its most radical vulnerability, is suggested with great poetic and formal balance. This is also what happens with the Plastiche where, once again, it is again the use of fire that inflicts the burning of life and death on a weak and formless material like plastic”.

On the occasion of the exhibition, a major publication printed on high-quality, large-format paper with unpublished testimonies and research on Alberto Burri, his work and the Grande Cretto di Gibellina has been published by Magonza. A new text by Massimo Recalcati collects further developments of his research, along with interventions by art historians such as Gianfranco Maraniello and Aldo Iori.

The exhibition is sponsored by the Fondazione Palazzo Albizzini Collezione Burri, Regione Sicilia, the Comune di Gibellina and the Fondazione Orestiadi.